finished this this weekend for my neice.
also made serious mileage on the river rapids socks for my mom.
my hands are sore. 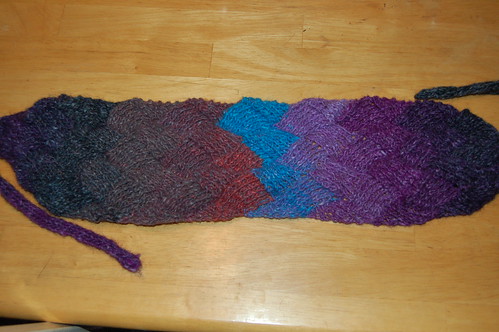 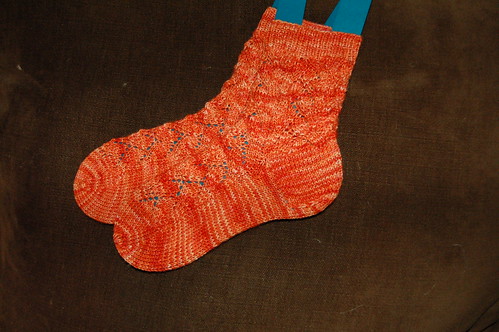 man did i have a GREAT time this weekend.
an camping weekend was organized on ravelry.
after about 30 false starts, i finally got down to the campsite around 6:30 and set up my tent and bought some firewood and met my site mate, renae. she's pretty awesome. there were 3 different sites full of people there for knitting, spinning and dying. the folks running the campsite got a big kick out of us coming to their place to do it, and even put out flyers for a couple of knitting machines they had for sale.
it was just south of the cities...maybe 45 minutes from my house. a beautiful campsite, with very private sites as long as you didn't need full hook-up for an RV.

we didn't get much done the first night, but MAN did we get a lot done saturday. renae dyes. i mean REALLY dyes.
so we had dye pots out pretty early...and it seemed like everyone brought something except me.
renae talked me into dying some of my crapwool, which turned out great. and i also wound up getting some undyed roving (split with renae) and yarn for xmas gifts...some of which turned out awesome and some of which really needs to be over-dyed because renae took one of them out too early by mistake, and the other just didn't end up how i wanted it to.

the first night was numbingly cold and i hardly slept, even in a goose-down bag until the sun began to come up. we had frost advisory - so it probably got down to 35 degrees or so. there was frost on the bath house (which was beautiful, clean and HEATED. very important.
the second night, renae invited me to crash in her pop-up camper. SO nice of her. i woke with a crick in my neck, but otherwise well-rested.
it started raining at around 4am and we had to go rescue all the yarn and roving hanging on the line to dry. this morning was spent cleaning our wet campsite and going to perkins for breakfast, as we were out of propane for the stove and all our firewood was wet.
we had a giant potluck saturday night and wound up with about 12 people at our site and all kinds of good food. i loved making new friends.

x-posted to my lj and

I entered a pair of socks in the State Fair, and they didn't win anything, so I didn't look too hard at the knitting display cases when I was there last week. Now a friend of mine who was there yesterday (and who had seen the WIP) swears she saw them in a display case.

Does any one know if they rotate what's in the display cases? (i.e. if I wait til Wednesday to go again, which is my current plan, will I still be able to see them?)

Hey all, I'm on the Clickety Sticks email list and I got an email a couple days ago that they are closing. The sale started yesterday. Haven't been out there yet, but they do have a good selection of stuff usually. They've never been my favorite, but it's still sad to see them go. :(

Hey all, Creative Fibers at 54th and Penn is closing. The owner is moving, and couldn't find a buyer.

Right now everything in the store is 25% off. There are still quite a few needles (including the Addi Turbo lace needles I've been looking for), and books, and lots of Karabella Aurora 8, Cascade 220, and Galway whatever it is. And other stuff.

The store will be open until the end of September. I'd imagine the deals will get better and the selection thinner.
Collapse